Saint of the Day

Summary: St Leonard was a Franciscan priest and successful retreat preacher. He popularised the Stations of the Cross and believed that the devotion along with regular confession were the secret to helping people maintain the personal reforms initiated during a retreat.

Patrick Duffy tells here what is known about St Leonard.

Educated by his uncle 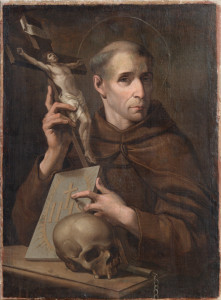 Paul Jerome Casanova was born in Porto Maurizio, then part of the Republic of Genoa, on 20th December 1676. His father was a ship’s captain in the Genoese Merchant Service. His mother died when he was only two and his father married again; they had four other children, three boys and a girl. A rich uncle in Rome took him there for his education and he learned the humanities, rhetoric and philosophy at the Gregorian University, intending he should become a doctor. But Paul met some Observant Franciscans who lived at the Riformella or the Convent of San Bonaventura al Palatino and decided to join them. His uncle was not happy, but his father agreed and at 21 Paul entered the novitiate at Ponticelli in the Sabine hills, taking the name of Brother Leonard.

Ordained a priest in 1703, he offered himself for the Chinese mission, but he was asked to study. He soon developed a stomach ulcer and had to return home to the more favourable climate of Porto Maurizio to rest or perhaps to die. He made a vow that if he recovered he would dedicate his life to missions and the conversion of sinners. After four years he was restored to health and soon began a 40-year career of preaching retreats, Lenten sermons and parish missions throughout Italy. His missions lasted 15 to 18 days, and he often stayed an additional week to hear confessions. He said:
“I believe that in those days the real and greatest fruit of the mission is gathered. As much good is done in these days as during the mission.”

San Miniato near Florence
When Cosimo III de Medici handed over the monastery of San Miniato near Florence, also called Monte alle Croci to the members of the Riformella, Leonard was sent there and began to give missions to the people in Tuscany. These were marked by extraordinary conversions and great results. He and his colleagues practised severe penances during the missions.

Stations of the Cross

Incontro
Leonard realised amid the exhaustion of his retreats that he needed time to pray alone, and so he regularly began to make use of the ritiri (houses of recollection) that he helped establish throughout Italy. The first he founded in 1710 on a peak in the mountains about four and a quarter miles from Florence, where he and his assistants could retire from time to time after missions, and devote themselves to spiritual renewal and fresh austerities. 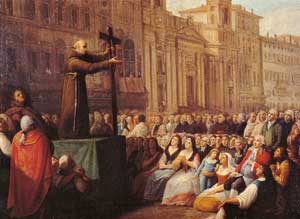 Central-Southern Italy and Corsica
By 1720 Leonard moved his celebrated missions from Tuscany into Central and Southern Italy, firing up the population. Two Popes Clement XII and Benedict XIV valued his charism and asked him to come to Rome, which he did for some time. From May to November, 1744, he preached in the Island of Corsica, which at that time belonged to the Republic of Genoa and which was frightfully torn by party strife.

Death and influence
In November, 1751, when he was preaching in Bologna, Pope Benedict XIV called him to Rome, sensing the end was near. Leonard arrived at his beloved monastery of San Bonaventura al Palatino on the evening of 26 November, 1751 and died that night at the age of seventy-five. His remains repose under the high altar there. Pope Pius VI beatified him in 1796 and Pope Pius IX canonised him in 1867. He is the patron saint of those who preach parish missions.

Our Archive of Saints